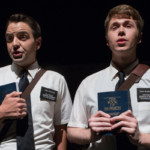 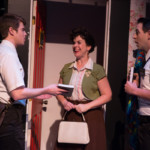 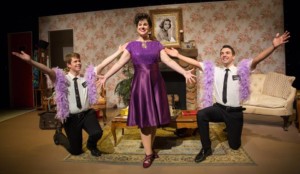 Book of Merman by Leo Schwartz

An outrageous musical comedy that combines musical theater’s current “Mormon-mania” and everyone’s love of the Queen of the Musicals herself, Ethel Merman.  Mormon missionaries, Aaron and Jacob, on a two-year stint to convert more Latter Day Saints, ring a buzzer that says, “E.M. Welcome.” It doesn’t mean “Every Mormon Welcome” as the hopeful proselytizers imagine. The owner’s name ain’t “Welcome” either. It is the sacred bungalow of Ethel Merman, who didn’t die after all in 1984 but lives on.  This meeting of squeaky-clean, fresh-faced, sexually-stunted Utah goody goodies with the brassy, bumptious, leather-lunged Queen of musical theatre not only proves that opposites don’t just attract, they put on a show.  Haunted by a dream not unlike the one in Gypsy, Aaron is a frustrated Broadway camp follower, gaga over seeing his idol. Ripe for Times Square corruption, stage-struck Aaron keeps La Merman’s autobiography in his backpack. Resisting the urge to belt out ballads, demurer Jacob can’t immediately bring himself to desert the cause of Brigham Young, though his repressed longings for Aaron demand a different destiny.  It is up to earth-mother Ethel to teach them that the goddess is not godless and that destiny wins.