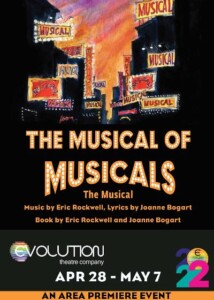 April 28 – May 7
Area premiere
The Musical of Musicals, The Musical Music by Eric Rockwell, Lyrics by Joanne Bogart
Book by Eric Rockwell and Joanne Bogart
Directed by Joe Bishara
Performances: April 28 (Preview) at 7:30, April 29 (Opening) at 8:00, April 30 at 8:00, May 1 at 2:00, May 4 & 5 at 7:30,
May 6 & 7 at 8:00
A musical about musicals! In this hilarious satire of musical theatre, one story becomes five delightful musicals, each written in the distinctive style of a different master of the form. A Rogers and Hammerstein version; a Stephen Sondheim version; a Jerry Herman version; Andrew Lloyd Webber version; and a Kander & Ebb version. 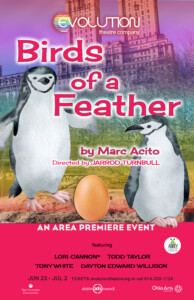 BIRDS OF A FEATHER recounts the story of Roy and Silo, the two Central Park Zoo male chinstrap penguins who partnered, adopted an egg, hatched, and raised a chick together. BIRDS OF A FEATHER centers around the trials and tribulations of parenting, regardless of your species or sex. Roy and Silo are no strangers to the spotlight. In 2005, they were the subject of a widely contested children’s book, And Tango Makes Three, by Peter Parnell and Justin Richardson. The book, temporarily pulled from school bookshelves in Loudoun County, became one of the most banned books in the US.

Marc Acito won the Helen Hayes Award for Best New Play with his comedy Birds of a Feather. He is the head writer of the musical Allegiance, which won the Craig Noel Award for Outstanding New Musical for its run at the Old Globe and is the book writer of A Room with a View, which also had its world premiere at the Old Globe and will appear next season at the 5th Avenue Theatre in Seattle. With producer Dede Harris, he is developing a stage adaptation of his first novel How I Paid for College, which won the Ken Kesey Award for Fiction and was an Editors’ Choice for The New York Times. Translated into five languages the author cannot read, the novel inspired a sequel, Attack of the Theater People. Other projects in development include a Comden & Green revue for producer Eva Price and a collaboration with Urinetown composer Mark Hollmann. A theatre historian and a regular contributor to Playbill, Marc teaches Story Structure to writers of all mediums at NYU.

Beau, a pianist expat living in London, meets Rufus, an eccentric young lawyer, at the dawn of the internet dating revolution. After a life spent recovering from the disappointment and hurt of loving men in a world that refused to allow it, Beau is determined to keep his expectations low with Rufus. But Rufus comes from a new generation of gay men who believe happiness is as much their right as anyone else’s, and what Beau assumed would be just another fling grows into one of the most surprising and defining relationships of his life. A remarkably moving, brilliantly funny love story, GENTLY DOWN THE STREAM reflects the triumphs and heartbreaks of the entire length of the gay rights movement, celebrating and mourning the ghosts of the men and women who led the way for equality, marriage, and the right to dream.

Is an American dramatist and screenwriter best known for his 20 stage plays which have been produced in over 60 countries. He rose to fame in 1979 with the production of his play Bent, which explores the persecution of homosexuals during the Holocaust. Bent was a Tony nominee for Best Play in 1980 and won the Dramatists Guild’s Hull-Warriner Award. It was adapted by Sherman for a major motion picture in 1997 and later by independent sources as a ballet in Brazil. Sherman is an openly gay Jew, and many of his works dramatize “outsiders,” dealing with the discrimination and marginalization of minorities whether “gay, female, foreign, disabled, different in religion, class or color.” He has lived and worked in London since 1980. 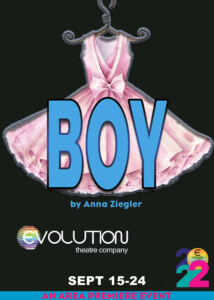 September 15 – 24
Area premiere
Boy by Anna Ziegler
Directed by Mark Phillips Schwamberger
Performances: September 15 (Preview) at 7:30, September 16 (Opening) at 8:00, September 17 at 8:00, September 18 at 2:00,
September 21 & 22 at 7:30, September 23 & 24 at 8:00
Inspired by a true story that explores the tricky terrain of finding love amidst the confusion of sexual identity, and the inextricable bond between doctor and patient. A well-intentioned doctor convinces the parents of a male infant to raise their son as a girl after a terrible accident. Two decades later, the repercussions of that choice continue to unfold. 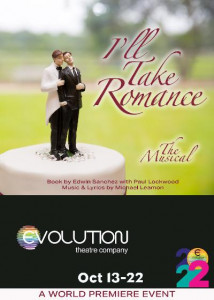 October 13 – 22
World premiere
I’ll Take Romance, The Musical
Libretto by Edwin Sanchez with Paul Lockwood, Music and Lyrics by Michael Leamon
Adapted from the original stage play, I’ll Take Romance by Edwin Sanchez
Directed by David Bahgat
Performances: October 13 (Preview) at 7:30, October 14 (Opening) at 8:00, October 15 at 8:00, October 16 at 2:00,
October 19 & 20 at 7:30, October 21 & 22 at 8:00
A delightful new musical that proves love will always triumph. Angel, a gay gold digger, sets his sights on a newly out and proud billionaire. Dragging his best friend along for the ride and leaving collateral damage in his wake, Angel’s plans hit a wall when the billionaire’s best friend, Chi Chi, steps in and takes over. Mixed in with vengeful ex-wives, an imaginary lover, closeted twin brothers.

Become a 2022 Season Sponsor an see you name in lights! Well not realy but in our program and displayed in the theatre lobby. Showing the world that you care about the Arts. And that you are helping to keep LIVE THEATRE ALIVE!
Page load link
Go to Top